Contributed to the SAMS postgrad blog on July 6, 2012

Things are tense on board Discovery. Suddenly everyone finds a reason to be on deck to witness our 4,000 ton ship maneuver with infinite care towards the ocean glider, now lifeless and floating on the surface. It looks tiny against the vast backdrop of the Atlantic Ocean. This glider has been at sea for a week; the others will continue to travel for months and cover huge distances on their minimal power requirements.

We’re coming to the end of a three-week cruise to the edge of the continental shelf, part of a study into the transition from the deep ocean to shallow shelf seas. The gliders are an invaluable part of this research: for us, it’s like having four extra ships sampling simultaneously. The term ‘underwater aircraft’ best describes their propulsion mechanism: they literally fly though the sea on small swept wings, to my mind a very aesthetic way to conduct marine physics.

To understand their place in ocean science, let’s step back a few decades. When oceanography was solely conducted from the back of ships, our knowledge of the deep sea was sparse. A glance at any major ocean on Google Earth illustrates the problem: they’re simply enormous expanses of water, too big to sample effectively using ship-borne instruments alone. The advent of satellite imaging allowed scientists to visualise entire oceans for the first time but crucially only the ‘surface skin’ is seen from space. The vast majority of the water column, and all of its dynamic internal currents and processes, remains invisible.

In order to work out what’s going on beneath the surface, nothing beats actually being there. Some observations came from unexpected sources; for instance in 1992 a storm washed 30,000 plastic bath toys off a container ship in the North Pacific. Their arrival in locations ranging from Alaska to Japan gave oceanographers the opportunity to test their models against real-life data. Modern drifting buoys are not dissimilar: imagine a rubber duck with a GPS transmitter fitted to it. It goes wherever the current goes, and you can track its progress remotely. If you want to know the currents at 50 metres depth, simply attach a weighted drogue (like an underwater sail) on to 50 metres of rope, and your drifter’s trajectory now represents that of the deeper current.

The Argo project takes this concept a stage further. Argo comprises 3,000 robotic drifting floats, scattered throughout the world’s oceans. Each float can alter its buoyancy by inflating or deflating a bladder from an oil reservoir, allowing it to sink to 1-2 km beneath the surface. It remains here for 10 days, traveling with deep currents which transport vast amounts of water and energy around the globe. It then rises rapidly to the surface, measuring physical properties during its ascent. In this way we have both a horizontal and vertical measurement from the float, which can repeat this cycle for many years without human input.

It’s hard to overstate the value of the 3,000 floats combined. They have improved data coverage in both time and space by several orders of magnitude, providing real-time measurements from the most remote and inhospitable parts of the planet.

Applications include hurricane observation, ENSO (El Nino) forecasting, ocean dynamics and global change analysis. They even contribute to our weather forecasts: the subsurface temperature of the Atlantic strongly influences future weather patterns over the UK.

After my Master’s degree I worked for the British Oceanographic Data Centre in Liverpool, and was fortunate enough to be involved with Argo. To me it seemed to embody the best parts of international science; 30 countries working together towards a common goal, a classic example of a whole being greater than the sum of its parts. My role at BODC was to maintain the data-stream from UK Argo floats, and it’s certainly interesting to find myself, having started a PhD in physical oceanography, using that data in pursuit of scientific goals. The immediate consequence for me is that if I need physical ocean data from almost anywhere in the world in the last 10 years, chances are it will be there, and in sufficient quantities to do something useful with.

One drawback of Argo is that, for the most part it is a passive observing system. If I want to take a measurement at a specific location I can’t simply tell a float to go there, any more than I could control the movements of the intrepid rubber ducks in the Pacific.

This, in a roundabout way, brings us back to gliders. Mechanically, they resemble Argo floats but their wings and guidance system allow them to fly through the water, opening up a world of possibilities for research. They can travel thousands of kilometres between preset waypoints or, as in our present case, continue to methodically sample the same location long after the ship has docked and we’ve all gone home. Whilst currently used for discrete experiments it’s hoped that they will complement Argo in a future robotic ocean observation network.
Back on board Discovery, our glider has been deftly plucked from the sea and will be checked and calibrated before its next mission. Development is ongoing; this version has been fitted with a turbulence sensor to measure the cascade of energy from oceanic to centimetre scales. In theory, it should be the perfect platform for turbulence measurement as it moves at a low speed with little vibration or noise.

I’ve only scraped the surface of current marine technology, but having arrived at this PhD from an engineering background I wanted to share my enthusiasm for some of the ingenious devices which not only survive in the hostile marine environment, but gather persistent, 3D ocean data which can be viewed in real time via the internet. In my opinion, it’s an exciting time to be an oceanographer!

Argo has a Google Earth app which lets you explore the present locations and data from the fleet: http://argo.jcommops.org/argo.kml

You can follow the progres of the SAMS gliders at http://velocity.sams.ac.uk/gliders/

Float of the month – January 2011: Circling the North Atlantic

Originally published at the Argo operations site: http://www.jcommops.org/argo and ukargo.net

The Argo float of the month is WMO# 6900388 which was deployed on October 19th, 2005 at 61.26 degrees N, 20.01 degrees W in the North Atlantic. This Apex float has completed 187 profiles so far, and is approaching a complete loop of the North Atlantic Sub-Polar Gyre. Figure 1 shows the float’s path, closely following the continental shelf edge around the Greenland and Newfoundland coastline before returning eastwards at a latitude of 50 degrees.
The float passes the southern tip of Greenland in spring 2007 (1), which can be seen in the figures as the first cold and fresh intrusion into the surface layers. This water originates in the Arctic and despite its low temperature remains buoyant due to its low salt content. A similar cold/fresh surface event can be seen in January 2008 (2), but by this time the float has crossed the Labrador Sea and is following the Newfoundland continental shelf. During this period the float travels up to 200 km between its 10-day sample stations, an average speed of 20 cm/s whilst drifting at 1000 m depth.

In February/ March 2008 (3) the upper 2000 m are well mixed, with both temperature and salinity remaining more or less constant throughout the visible water column. This seasonal deepening of the mixed layer due to winter storm activity is present but not so pronounced in other years shown.
As the float reaches 50 degrees N (4) it meets the northern boundary of the Gulf Stream and is deflected eastwards. The Gulf Stream is an energetic, unstable flow and this is apparent in the increasingly meandering path and fleeting encounters with warm and cold water features as it traverses the eddy field. Although there is always a seasonal signal present in surface temperatures, during the transit of the Gulf Stream a more chaotic signal is superimposed on this by interaction with the fringes of the warmer current.

Figure 6 shows the trajectories of our float (red) and an additional float, WMO 4900628 deployed by Argo Canada (blue). They are overlaid on an annually averaged temperature colour map at 1000 m depth from the UK Met Office FOAM hindcast model. This illustrates some typical features of circulation in the North Atlantic at the float’s drift depth. In particular the narrow, linear flow around the north of the basin contrasts with the turbulent progress of the Gulf Stream in the south. It appears that our float has followed the north-western arm of the North Atlantic current, and may commence a second circuit of the North Atlantic. Float WMO 4900628 takes an alternative route, travelling up the Rockall Trough on the other main arm of the current which ultimately carries warm water towards Norway and the Polar Regions.
WMO 6900388 continues to supply good profiles and application of the Owens & Wong (2009) calibration method reveals no significant sensor drift over its lifetime. 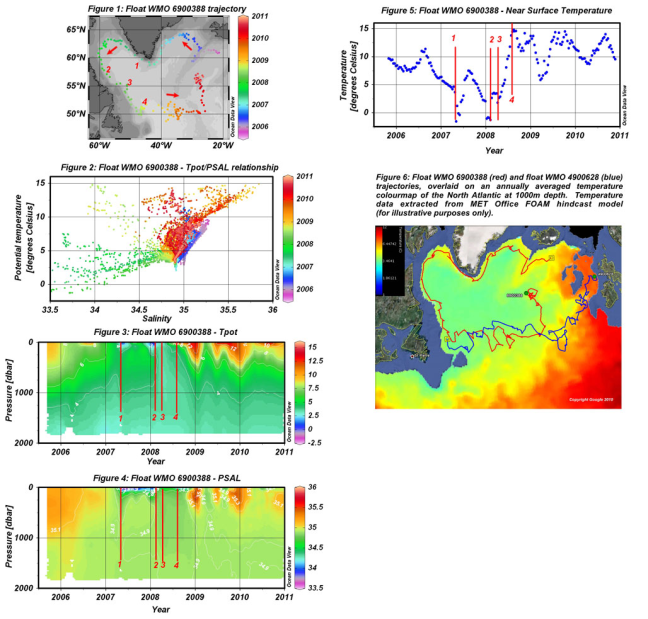